Like the time I signed up to a triathlon without even owning a bike. 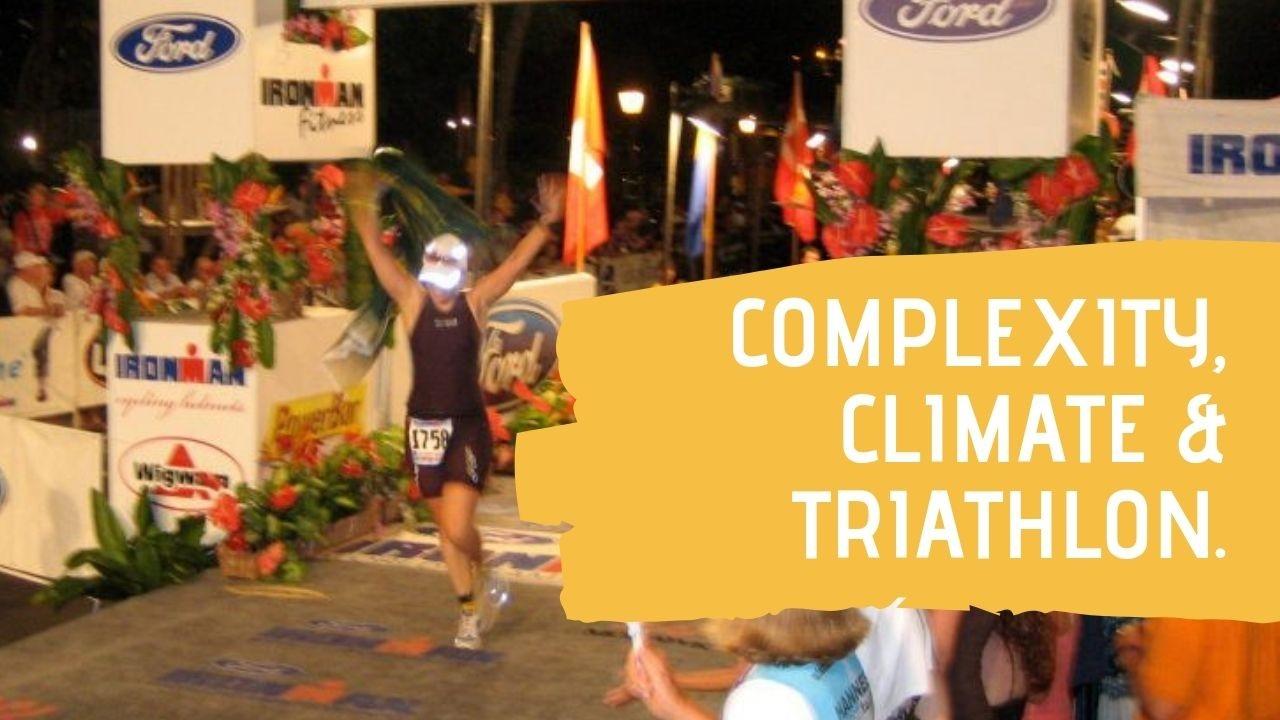 Seems like we signed up to a en event we are not prepared for.

Like the time I signed up to a triathlon without even owning a bike.

Who would do such a thing right?

Well we did, and the triathlon is the environment and the bike is climate adaption.

In this article I reflect on how I overcame that challenge in triathlon, what research about climate adaptive research methods and complexity theory can inspire us to do so we don’t bonk out in the marathon of life. Specifically I reference climate adaptive methods research (Füssel 2007)  and an interesting book Complexity (Mitchell 2009), and my own blunder to thunder in triathlon.

It has been said that complex systems are those whereby large networks of ‘things’ (with no central control and simple rules of operation) make complex (collective) behaviour, clever data processing and adaption via learning / evolving (Mitchell 2009). In the past, I used to race long triathlons (Ironman) which felt well describes this notion of complexity. From my bike chain tension to salt intake on the last half of my run, to training exhaustion to motivation mechanisms; it was seemingly a big group of elements, but the simplicity was I just had to get up every day with the alarm and swim, ride or run (or all three), put my smart watch on and get more aerodynamic in every discipline. It came down to practice and evolution of my muscle memory. Mitchell in her book on ‘Complexity’, summed it up to being a system of nontrivial emergent and self organising behaviours. I got input from my coaches, and then my body did what it could with my gait and V02 max.

I love thinking of this example in context to climate adaption and the seeming assumption that it is a set of ‘givens’, when in fact, as described in Integrated Research System for Sustainability Science, Füssel says that climate adaption is more about the accuracy of the assumptions (impact projects) which are unfortunately, very uncertain (because they are future based).

It is like my triathlon training; who knew what time I would bounce or crawl over the line at the race; even though I completed the training volume as required.

Füssel conducted research comparing climate mitigation and adaption; coming up with the alike-ness that adaption is like the old risk management approach that we know from the past.

What Füssel, from the European Environment Agency, went to explain from his research about the risk management analogy, was that the big difference to risk management is that today there are unprecedented methodological challenges because of the uncertainty and complexity of the hazard of climate change.

As Mitchell from the complexity approach well-suggests:

It is suggested in Füssel’s literature, and also in meetings I attend from national to regional legislatures in environmental (waste, tax, innovation, bioeconomy) determinations, that there is still so much unknown about climate adaptive assurances - as much of the methodological literature comes from just a few limited regions of the world where science and academia have been charged with investigation. In addition, it has a massive volume of stakeholders involved. It was like when I went from basic jogging to triathlon and suddenly had an increase in complexity in my training gear, timing and approach. In fact the biggest challenge in triathlon training is not about DOING the training, it is about doing it so you don’t sabotage the next session.

Well describing the political, climatic, environmental and social interdependencies in addressing climate adaption approaches. And taking a giant dose of insecurity in the future.  Mitchell’s analysis on Complexity brought it down to this: ’It’s the best possible time to be alive, when almost everything you thought you knew is wrong.’

So where does it leave us? While triathlon training is no fair analogy to climate adaption in policy and commerce, it does make us reflect on how vital being open to the complexity dynamic is. Füssell advocates mobilisation of both public and private resources to proactively address mitigation options and also to keep an eye on the fact that we’ve not had an eye on the facts before.

Climate adaptive processes are new to us.

And in the world of complexity, that doubles the issue. I actually understand this part. When I signed up for my first triathlon, I was at the Ironman Frankfurt Germany, saw my first triathlon and thought: ‘’whoa cool, I would like to try that’’. I signed up for Ironman that day, without owning a bike, having not swum more than in a bikini around a pool bar for years, yet was a good jogger. My ignorance to the changes and lifestyle ahead was impossible to describe. Finally some years later I ended up riding through the lava fields at the world championship and spent most of the 13 hours reflecting on ‘underestimation’. However for my coach it was normal.

However we have no coach in climate adaption.

Also, it seems that we learn to ‘do’ climate adaption by having accidents. True, I did learn to ride a road bike by having quite a few (harmless) accidents (mostly falling off my pedals at stop lights). Füssel asserts that adaptation needs arise often (but not always) from extreme events rather than from average climate conditions. That is, I went to bike skills workshop after enough scraped elbows, however why do we seemingly wait for accidents in environment to remind us to get fitter and smarter in climate adaption?

In summary, we need to keep an eye on broad sources of data and introspection about climate adaption and get beyond just mitigation as a short term approach. For me, as a cacao farmer that means we are looking carefully at shade trees to reduce direct sun / heat on growing cacao trees, we are looking at ground cover with various legumes to keep the soil covered, we are considering different topographies where we can grow and we are taking immediate effects to mitigate the volume of risk and disaster we have today.  Getting clear about the complexity of stakeholders involved and realising that we have NOT addressed this rate of change, impact of change ever in the history of humanity and having that wide open mindset to managing our complexity to create, evaluate and implement meaningful change mechanisms.

Although we humans did not sign up to the earth as a voluntary hobby, like I did with my triathlon; we are here for the long-term and impact. We can either blunder our way through and puke on the final line or we can prepare, adapt, get ourselves fitter, smarter and manage every part of our training and inputs so we are resilient and strong for the future.

See you in the training lane. Up early tomorrow. Let’s get adaptive and take hold of that complexity. 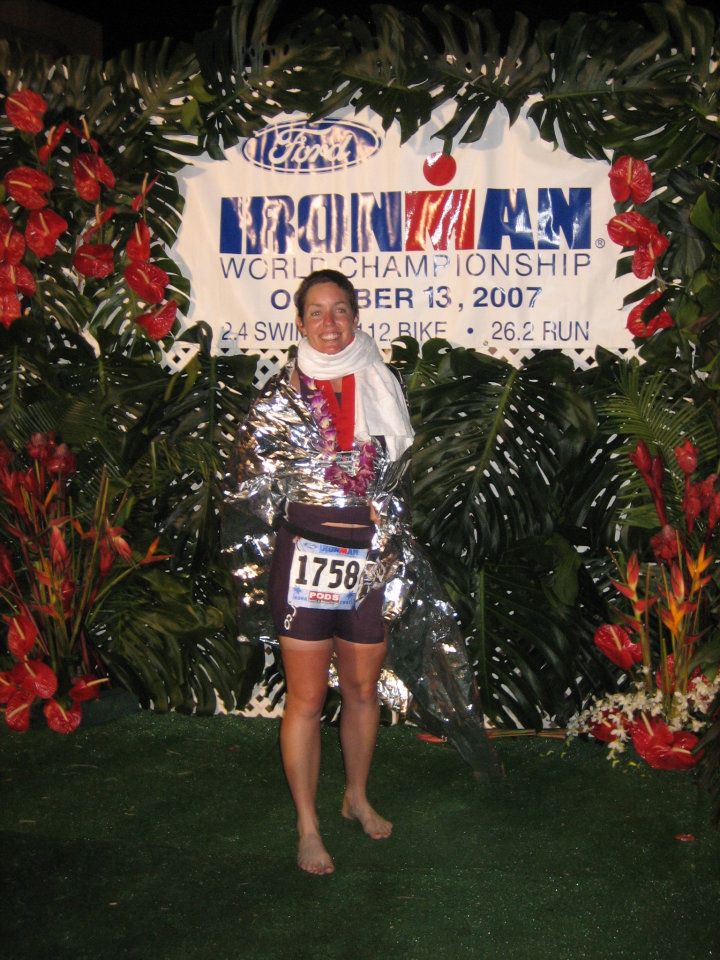